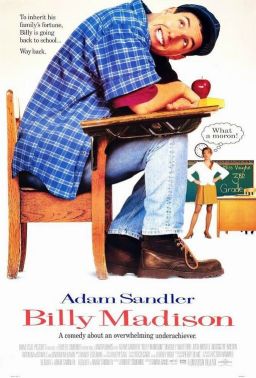 Why I Love This Scene: Remember the time that Adam Sandler was actually funny? Sure his early hits like Billy Madison, Happy Gilmore and The Wedding Singer were cheesy, relied on nostalgia and were completely sophomoric but I’ll take that over dumb and unfunny Pixels, Click and Grown Ups. Sandler was a rising star back in the mid-90s and was quickly becoming the next big SNL star in movies. Weeellll, he is still big but  who really knows why? His modern movies are some of the biggest turds ever laid on the silver screen. I was a huge fan but now I can’t even look at 10 minutes of any of his recent films. It’s such a shame that he can’t seem to make decent comedy anymore.

But Billy Madison started his full-fledged movie career and it’s still one of the funniest cult comedies. I can fill a month’s worth of posts writing about this movie but today I just want to highlight the “Nudie Magazine Day” scene. Why? Maybe because it’s fucking ridiculous that Billy has such a day in his calendar of events or that he parades like a drunken moron in a golf-cart shouting “IT’S NUDIE MAGAZINE DAY!” while he zooms off to his mailbox or that the magazines he subscribes to are utterly disgusting by most perverted standards (“She-Male Fiesta”—both misogynistic AND racist!)

Or maybe because Playboy is going with non-nudes starting in their March issue. I grew up trying my damnedest to peruse any and all pornographic magazines from my dirty ‘ol man’s stash that I can find hidden around the house. Videos too but that was way harder to come by in those olden golden days. Stimulating, educational, as well as artistic (in a way—C’mon!), those books, magazines and smut rags were essential to young boys becoming men. Nowadays, everyone is a few clicks away from finding any sick perverted sex act known in the universe but back in my day, glossy print was all we had.

So have a Happy Valentine’s Day weekend kiddies! Spend it in a Nudie Magazine Day kind of way!