Synopsis: In a post-nuke future, one man is the salvation to re-population of the Earth—Sam Hell (Piper)! In a mission to rescue very fertile women from mutant frog men, Sam must join forces with medical/military women all while wearing a chastity codpiece that can blow his junk sky-high! 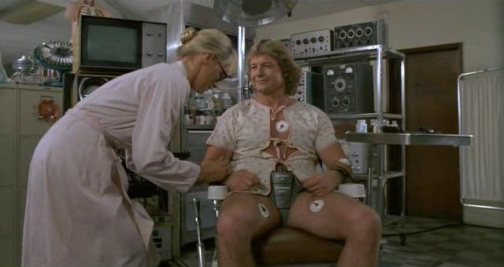 This will certainly help you in your bout against Adrian Adonis!

What work(s): I’m sure most of you heard the tragic news that highly entertaining and talented wrestler/actor/personality Roddy Piper died on Saturday. Brian and I were actually going to see the new Mission: Impossible film when we got the word. Immediately after the fun action flick, we downed a few beers full of tears for one of our favorite wrestlers and watched Hell Comes to Frogtown, which has been in our Schlock radar for a long while now and sadly now we’re checking it out.

I gotta say it was a fun little B-grade schlock entertainment. Granted, it was miles away from the classic They Live but it was still helluva lot of fun to watch. The premise was very silly having Piper wear a boogie-trapped codpiece so he didn’t stray from his captors nor use up his man-juice before he uses it on only fertile women. If that doesn’t pique your interest then move along. And not only codpieces of torture but he has to infiltrate Frogtown and rescue young, lively women from their Frog-Mutant overlords. Yes, I said Frog-Mutant. Literal, anthropomorphic frogs that talk and wear clothes. Not the best make-up design but that’s all part of the schlock charm. All through-out Piper plays his heart out for the camera; never looking like he’s just collecting a paycheck or waiting for John Carpenter to call him back. And this film is full of good humor. It knows it’s not great but wants the audience to still have a good time—which you should.

What fail(s): Well it is complete schlock and the whole movie is just bat-shit insane. Bergman looked like she wanted to strangle her agent any chance she could and pardon me for saying, but a movie about forcing a man to impregnate women for the sake of humanity, there could’ve had a lot more nudity. The Frogmen villains could’ve been more menacing or at least more interesting. It was bad enough suspending our disbelief that there are men and women in rubber frog suits with terrible jaw articulation but they don’t do or say anything worth mentioning. We were also a tad(pole) confused why they wanted and were aroused by human women but they were just horny-toads I suppose. There’s a lot of weak plot development and a ton to laugh at and nitpick but sadly, this wasn’t such a memorable flick really and won’t be on anyone’s top ten lists anywhere outside of Frogtown.

Overall: I really wish I saw more Piper movies. Looking at his filmography he’s in a ton of schlocky shit and it looks like his film career peaked at 1988 with They Live and Hell Comes to Frogtown. Shame because he was an exceptional personality in front of the camera. Hell Comes to Frogtown should be a way better cult classic with such an off-the-wall plot and with these actors. This is something I would’ve watched incessantly as a kid with my goofy friends. It shouldn’t have been so underrated. I haven’t even heard of it until the last few years and despite it starring one of my favorite wrestlers I never rushed to watch it. I think part of that is the frog people premise. If it were lizards I may have been quicker to check it out. But frogs are just not menacing enough to take seriously. They barely have teeth! Oh well, I’m still glad I finally saw it but I’m pissed it took such a tragedy to propel me to do so. 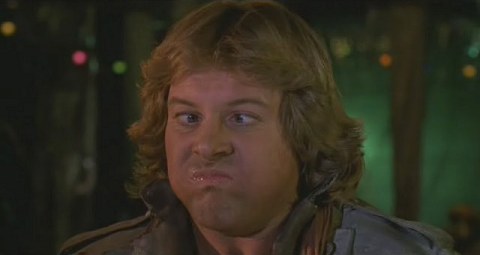 I’d be remiss if I didn’t mention also the vast similarities between Hell Comes to Frogtown and the recent Mad Max: Fury Road. Both have a reluctant hero who goes in an uneasy alliance with women who drive across a barren wasteland to save several maidens from a megalomaniacal overlord, who wants to use the women for his own sick and twisted purposes. Instead of a metal muzzle over Piper’s face there’s a metal codpiece. Both films feature a brutish hero (that bare the name of the hero in the title) but they are both marginally secondary to the female counterparts who drive the plot along. Watching Hell Comes to Frogtown had both Brian and I laughing at all the similarities between both flicks and if you watch it, you’ll see more than I just mentioned. I think Donald G. Jackson & R. J. Kizer should maybe call their lawyers to maybe give George Miller a call.