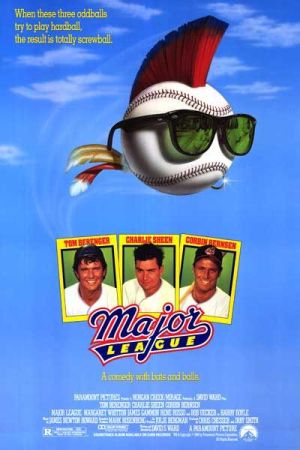 Why I Love This Scene: It’s Major League Baseball’s opening week and what better way to start off the season here at HT2HV than watching some clips of Major League. Arguably the best baseball comedy of all time—easily in the top five best sports movies of all time—with an all-star cast thats tough to beat. Charlie Sheen in his bad-boy prime, Tom Berenger and Corbin Bernsen giving some dramatic credibility to counter the juvenile humor and unknowns Wesley Snipes, Dennis Haysbert and Rene Russo giving great performances of their own.

Despite me not being a huge sports fan anymore I still appreciate and love the national pastime. It’s probably the only thing from my youth that I really miss playing. I love the look of the grass of a ball field on a hot summer day, the sound of the organ playing charge while hot dogs and cheap beer are being passed across the stadium rows. Most people complain about the sport and how long it is and possibly how boring it can be but fuck that noise, it’s the best sport in our country. Like laying in a hammock on a lazy summer afternoon, I can spend a whole relaxing summer day watching a ballgame. And since the 1980s when I was in full baseball playing and watching prime, Major League was the pinnacle of trapping time in a bottle for baseball ambience for me. It’s nostalgic as well as still resonating with the sports-related humor to this day.

The only other sports movie that I love watching around this time of year is Caddyshack because of the summertime feeling and its great soundtrack. But unlike Caddyshack’s crude and oftentimes juvenile humor (Doodie!), Major League is inclined to have a more serious overtone. After all the fictional Cleveland Indian team has got something to prove and really wants to win the pennant and ruin the bitchy owners plans of moving to Florida. By the end of the film the silly and sophomoric humor is brought down a few notches to make way for a more dramatic, romantic and inspirational side of the humor. Berenger, despite his age and aches is the hero of the game and gets the girl. Sheen also shines as the pitcher as well as gets the much deserved punch in the face from Corbin Bernsen whose wife Sheen slept with earlier in the film. I really love it when a comedy shifts it’s tone slightly by the finale to work in some drama and emotion as well as still play off the laughs. Many great comedies used to utilize this formula to great effect but I haven’t seen a recent comedy really use that formula that much anymore.

The whole flick is a classic and it’s more than difficult to just pick one scene. Every character in this film has a highlight reel and great lines to quote from. Christ, even the spectators and fans in the film are quotable and hilarious, like the Asian groundskeepers predicting that the Indians are shitty. Lou Brown, the head coach played by James Gammon, is the best coach in a sports comedy of all time in my opinion. But the one character that stands out the most for me in this film is the inimitable Bob Uecker, Mr. Baseball himself. Back in the 80s, Uecker became more of a baseball icon despite mediocrely playing the sport professionally. He starred in a bunch of great Miller Lite commercials, one in particular where he thought he was going to sit in the “front rooow” of a stadium and ends up in what is commonly called “The Uecker seats” all the way up high in the upper deck.

But he also was a comedian and TV star playing the family man in Mr. Belvedere. But here in Major League (and the crappy sequel) he plays the sportscaster for the Cleveland team and has some of his best lines in a movie and will be remembered and quoted by baseball fans for generations to come.