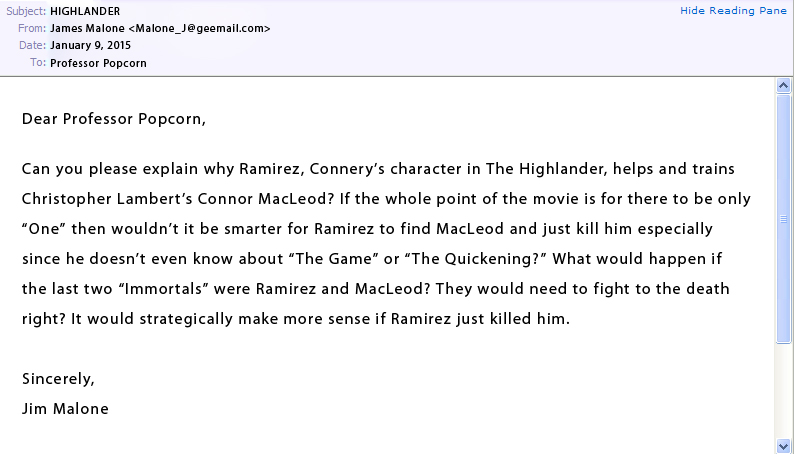 Oh boy. I was dreading the day that this particular movie question came to me. In fact, ever since I starting this venture with Hard Ticket to Home Video I’ve been nervous about the whole Highlander series. It is quite possibly the most confusing and incoherent sci-fi/action series in history. But you’re right, why would anyone befriend and ally themselves with another member of the same race that’s sole purpose is to be the last one standing to gain the ultimate reward? What exactly does Ramirez have to gain by helping and training another Immortal who, eons down the line, may have to be your enemy? The best answer I can give you is that Ramirez is either the worst swordsman in “The Game” or he was delegated to be the Quickening’s gopher/errand boy who had to go around the globe finding other Immortals to inform them that they were even in this cockamamie “Game” and what the rules were. MacLeod even after dying and resurrecting still had zero clue what was going on. He didn’t have one inkling that he was an Immortal involved in this cosmic game wherein other Immortals fight to the death (of beheading only) to gain superior power. So there would have to be people like Ramirez, who are basically so useless at “The Game” (why else would he help anyone?!) who act like rule masters or trainers, for lack of a better word, to help the true warriors to be better at fighting.

PS: For more information on The Highlander, I can suggest some great reference books on the subject: