Brad: I can only assume that I watched this as a kid because of my love of Star Wars. But maybe that’s not entirely true. I mean after all it’s a sci-fi adventure romp full of dashing and charming rogues, hot exotic damsels, robots, humor, and sword fights, gun battles and a disembodied head of Bruce Vilanch. What’s not to love?

The humor in this gem is it’s best asset. While no-one is a certified funny man prior to this film, everyone is downright ridiculous in this film. Come on, Robert Urich as a Han Solo-esque space pirate. How’d Anjelica Huston get involved with this? But the reason we as viewers, whether we’re 7 or 32, have so much fun is because it looks like everyone involved is having fun.

This movie is the very definition of tongue-in-cheek. Even the musical score is light-hearted and fun. While the effects and sets are never close to being Ed Woodesque or cheap like other Star War rip-offs like Star Crash, they do feel weak in a deliberate spoof way. I love, more so as an adult, the Atari game version of the ship’s defense system.

The weird thing I notice now is how creative and original the premise is. If this movie went the more serious route it also could’ve been good. A future where water is scarce isn’t a terrible idea. Especially when we’re warned that global warming is diminishing our polar ice caps and fresh drinking water on Earth. Having a future where pirates roam the galaxy pillaging ice like 18th century pirates were after spice, gold and rum is a decent idea to me.

OK, so they are pirates but it’s far into the future with space exploration, inter-planetary wars and (sort-of) sophisticated artificial intelligence but yet their main weapons are old-fashioned rapiers. They have laser-blasters but their antagonists are Templars who wear chain mail.

The two highlights in this film for me rewatching it today is Michael D. Roberts and the late great John Matuszak. They totally understood what type of movie they were in and are hysterical. Urich is OK but kind of takes himself a tad too seriously. Mary Crosby works best as the eye-candy her wardrobe was designed for.

It’s hard for me to think back and if as a youngster how much I got how much this movie was supposed to be a joke. My parents watched this while it played on cable with me and I recall how much they enjoyed the “Space Herpe” segment/joke. I laughed along, mainly because they did but also because the Herpe was a funny looking alien (I don’t think I got the Ridley Scott spoof then but it’s enhanced for me now) and also it was the first time I heard the word herpes and I thought it was a funny sounding word (still is). To this day I always think of this movie whenever I hear about the venereal disease. I also remember how much my parents and I enjoyed the time-sped battle climax especially when Roscoe’s afro becomes huge and white from age.

The pimp robot is great! He’s stereotypically black and keeps calling everyone ‘blood.’ All the robots are great actually. They are clumsy and clunky and talk in a high-pitched computer voice as if a baby Stephen Hawking had a cold and breathed helium.

I’ll tell you one thing: This movie makes me appreciate Ron Perlman a little bit more.

Space Pirates vs. Space Vikings!!! This movie has it all!! Seriously, this film crams as much myth and cultural genres as they can. Pirates, knights, Vikings, amazons, unicorns. I’m surprised there weren’t cowboys or Roman gladiators. Not enough time I guess.

Even as a kid I thought there was something off about Bruce Vilanch. I didn’t know what gay was exactly but I knew he lacked something.

Do you think it was deliberate that the sex scene looks identical to most trashy novel book covers? And it’s funny that it actually rains on them considering water is a scarcity.

The final battle scene is one of the funniest and original scenes I ever seen. From the sound effect whenever the time jumps slightly forward to the pregnancy to young adulthood of Urich’s and Crosby’s kid in a matter of minutes of screen time. Beards and hair growing longer and longer to Nanny not just dying but becoming a fully decomposed corpse. I can watch this scene everyday. Matuszak has the best line while dying, “I’d cut them to pieces ten minutes ago!”

This may be a rarity of our younger, seldom seen films on our list because I actually enjoy this movie more now as an adult than I did as a kid. I got more of the jokes and the humor and appreciate what the film’s motives really were.

Brian: This movie is notable to me for being the only movie I ever saw with my dad at the theater.  My dad and I saw The Ice Pirates, while my mom and sister saw Footloose at the same time.  Maybe my dad thought that The Ice Pirates was so good that any future movie he took me to would be a big let down.

Essentially what this movie tries to do is to take the best part of Star Wars (Han Solo) and turning it into a comedy about scoundrels and smugglers in outer space.  Kids would want to see it simply because it was a space sci-fi adventure, and adults had the comedy genius of Robert Urich and the supple figure of Mary Crosby.  While it wasn’t a big hit by any means, as far as space spoof movies go they really nailed it.

Looking at the movie now the supporting cast is fantastic.  Anjelica Houston, Ron Perlman, and THE TOOZ!  Who just happens to be one of my favorite people of all time, and he makes an excellent pirate, or “Raider,” if you will.  HA! … *ahem* … 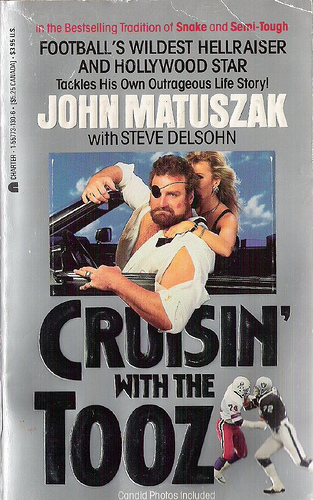 The Tooz, always a pirate.

I also had no clue what a herpe was when I was a kid, I just thought it was the name of the worm creature.  But now that I understand it makes the scene much much funnier.  The robots are awesome and hilarious, especially the one that pisses on the floor, and Pimp Bot is one of the greatest movie robots ever.

The end battle is amazing, and even though this is a spoof movie, it’s actually incredibly creative and well executed.  Seeing all of the events speed up leading up to the fight with the bad guys mesmerized me when I was a kid, and as an adult it’s still very cool.  Roscoe’s enormous white afro should have won some kind of costuming award.  One thing that kind of bothered me as a kid and sticks in my head more as an adult is when Jason’s son grows up to an adult in a span of 10 minutes and saves the day.  Since he grew up so fast, shouldn’t he be a babbling, drooling Robert Urich curled up in a fetal position on the floor instead of an action hero?

The movie does drag in places, like the scenes with the princess’s father, a lot of the stuff in Bruce Vilanch’s palace, and most of the part on the desert planet, although the frog woman  is hot.  Plus, the abrupt, freeze-frame ending feels like a bit of a let down.

But overall, I love the hell out of this movie, even more now than I did.  It’s absolutely better as an adult, even though the threat of space herpes is now very real.