What’s It About: The second gothic horror entry from Andy Warhol and Paul Morrissey, again starring Udo Kier as the titular Count and Joe Dellesandro, the Brooklyn-accented boy-toy from Flesh For Frankenstein. It again pushes the boundaries of good taste and decency, something even Vlad the Impaler would probably find offensive.

These are not the wirgins you’re looking for.

The count’s buddies told him to stop drinking after the 6th wirgin.

Is It Actually Scary: Not at all. This is probably the least scary Dracula movie that isn’t a strict comedy. Warhol’s Frankenstein at least had some attempt to be scary or gory but this movie is dull in that department. Way more funny than scary.

How Much Gore: Like Warhol’s Frankenstein version it has lots of blood. Less guts, which is understandable since this is Dracula but there’s gore galore. 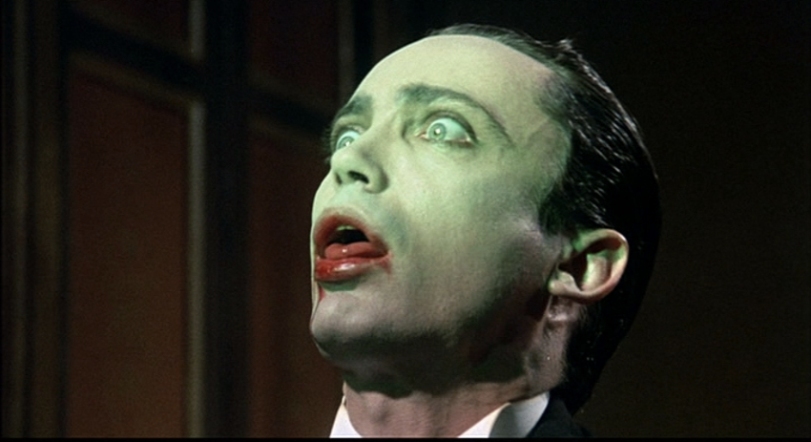 I though that wirgin smelled funny. But it was only a day after expiration too!

Best Scene: Not such an easy question for this film. It’s way more dialogue heavy than the Frankenstein movie and so not too many memorable scenes. Again, I’d have to go with Dracula’s fight flight from Mario and having his limbs chopped off and the well-done staking with the eldest daughter. The whole movie is dull and this scene win;t much better either.

Worst Scene: Like I mentioned the movie is basically a dull fest for a vampire/Dracula movie and it teeters on the fence between great schlock and different take on the tired count Dracula story. I struggled with coming up with a good Best Scene and I can equally struggle with a Worst Scene. I suppose it would be the Roman Polanski scene with Anton playing that childish game of mimicry. It was totally unnecessary and made Anton more of a central figure in a movie supposed to be devoted to Dracula. Dracula is basically third-billed in this film. 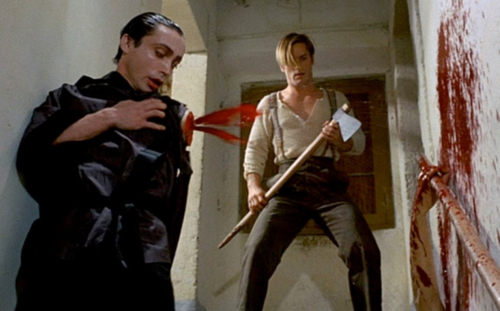 Hey Drac, I have to ax you a few questions!

Any Nudity: I think less than the Frankenstein version but still a lot. And full frontal as well. A couple of boring sex scenes with humping Dellesandro ass.

Overall: Not even close as great as the satirical Frankenstein, Morrissey dropped the ball on the Count. He was the sissiest, most whiny and weak Dracula ever portrayed on screen. From the first moments we see him, he’s applying make-up to his pale and life-less face, totally emasculating the Count. throughout the whole film he whines and complains to Anton and the Italian family. He has massive seizures and is refused to leave his room because he’s so sickly. He basically has nothing to do in this film. We have not one but two scenes of him vomiting the non-wirgin blood making him even more pathetic. It was getting really sad and depressing to see such a great villain be such a weakling. And then the conclusion is of him running like a bitch through the estate, not defending himself at all. If he did, in fact, drink wirgin blood he should’ve had his strength up enough to at least defend himself somehow. But sadly, we get this pathetic excuse of a vampire. I understand that it was a new take for the Count and I appreciate what the filmmakers were trying to accomplish but it didn’t make for a very interesting or memorable horror film. I would only recommend Flesh For Frankenstein to be honest. Both poke fun and parody the two famous gothic tales but Dracula wasn’t as well written or fleshed out.