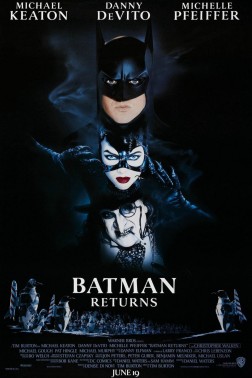 The Scene: Let’s wrap up this Batman nonsense by jumping ahead to the second-best ever Batman film: Batman Returns. This film not only features the second-best portrayal of a Batman villain by Danny DeVito, but also by far the best-looking Batsuit. However, this Batsuit had two glaring flaws. 1) Batman had to put shoe polish around his eyes in order to complete the looks, and 2) the mask apparently be literally ripped off of his head. In the pivotal scene in the big finale, Batman fully reveals himself as Bruce Wayne to his crazy girlfriend who thinks she’s a cat by ripping his cowl off. However, it would have looked very silly if he’d ripped the mask off and he still had two big black circles around his eyes, so right before he exposes his head, his guyliner suddenly disappears. It’s so jarring and obvious and it’s been a Batbug up my butt for years. There had to be a better way to film this, right? That was there best solution? Did Tim Burton just hope no one would notice Batman’s eye holes were a completely different color? Why even show that shot before he took the mask off? Maybe he should have been wearing sunglasses? Spider-Man doesn’t have this problem.