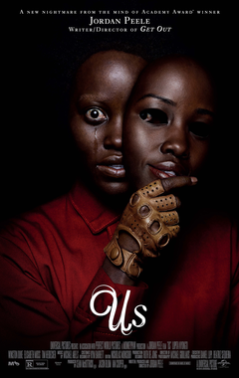 Synopsis: A family is terrorized at their beach resort house by doppelgängers.

What work(s): I DON’T KNOW! Seriously, I was heavily frustrated, confused and bored at this whole flick. I’m struggling REALLY hard to think of something I liked. And for the life of me I cannot think of one thing other than great acting by the cast.

What fail(s):  I loved Get Out last year. One of the best horror films in a long time. I totally championed Jordan Peele’s creativity, vision and skills as a great horror director. However, he immediately went full M. Night Shyamalan with Us. And I don’t mean with a twist ending that falls flat. Although Us doesn’t much benefit from the twist either.

I think the problem I have with Us is the entire premise. It’s so off the wall that I need a crane to suspend my disbelief. It’s one thing to have demons, ghosts, and other supernatural elements in a horror movie and be able to just go with the science fiction of the whole thing. Hell, there’s like 124 Friday the 13th rip-offs to prove this point. However, the plot to Us is so ridiculous that it took me right out of enjoying the terror and suspense because I had dozens of questions about how this all works. I cannot rant and rave about Us without going into SPOILERS so skip to the end if you haven’t seen it yet. 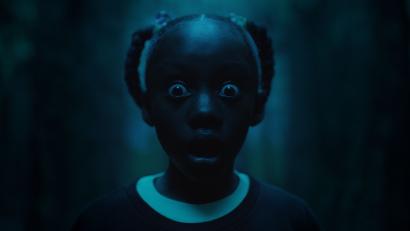 So, the film opens with ridiculous sub-titled prologue about how the United States has thousands of miles of unused underground tunnels. Fine. First shot we see is a TV with a commercial about Hands Across America. If you are too young to remember Hands Across America, congratulations on not knowing something so trivial and forgettable. However, this is somewhat important to the plot—even though it makes little or no sense (or means squat to me). Next to the TV are VHS copies of C.H.U.D. and The Goonies and immediately I recognize the reason why—C.H.U.D. (as you remember from Schlocktoberfest III) stands for “Cannibalistic Humanoid Underground Dwellers” and of course 90% of Goonies is set in underground tunnels. OK—tunnels. If this was set later on, I could see Peele having the poster for Teenage Mutant Ninja Turtles in the background. The prologue to the film is set in 1986 and young Adelaide (Lupita Nyong’o’s character) wanders off from her folks on Santa Cruz’s boardwalk (same boardwalk that Lost Boys is set, OK that’s kinda cool) and finds herself in a hall of mirrors/funhouse and the scene cuts with her being frightened with coming face-to-face with someone who may look like her. The movie then shows some flashbacks to Adelaide coping with the trauma but it’s mainly her being timid and mute. Flash-forward to present day and Adelaide Wilson and her family arrive back at Santa Cruz for vacation. No sooner than the first day they arrive, strange things happen. A homeless man holding up a sign with the biblical quote Jeremiah 11:11 (who Adelaide saw back in 1986) is found dead and their peculiar son, Jason (he’s constantly wearing an old school plastic halloween mask of what may or may not be Lon Chaney’s Wolf-man) sees a weird man on the beach bleeding and standing in the middle of the beach. Adelaide is constantly uneasy the whole day but her husband is nonplussed by her mood. They meet their white family friends, the Tylers and they supply some odd comic relief that seriously doesn’t work at all. AT ALL. But anyway later that night they find a family of four standing in their dark driveway holding hands. After the husband threatens them with calling the police they attack the Wilsons.

They manage to take over the Wilson’s and hold them somewhat hostage, making Adelaide hand-cuff herself to the living room coffee table. These intruders are all doppelgängers to the Wilson’s. But only the Adelaide doppelgänger speaks and she doesn’t speak well at all. (All the other doppelgängers in the film grunt like seals) We don’t find out why until the end. But we can surmise that these “people” are not of this polite society. The doppelgänger Adelaide (named Red) explains that while the Wilson’s had a good life up on the surface, their “tethered” doppelgängers had a rough life down below. And issue of class is the whole theme of the movie. While Get Out was bluntly about race, this one is a little more nuanced about class systems. Does it work?—not really in my opinion. Mainly because these doppelgängers are science experiments (we don’t know who or why they are experiments) and they were forced to live like zombies copying movements and actions in this underground facility under the Santa Cruz boardwalk. And when I mean copying movements and actions, I mean literally copying. Later on in the film we witness 1986 Adelaide wandering off we see other people on the boardwalk that she sees and this is compared to with what the young Red is seeing down below. Same people but underground mindlessly mimicking the above ground people. For instance she sees people on a rollercoaster on the boardwalk but underground these same people are “pretending” to be on the same rollercoaster. Like mimes. Like I said, this premise is totally off the wall. Like what happened to these doppelgängers when Adelaide and other vacationers were back at their respected homes? Adelaide and her family didn’t live in Santa Cruz so did the doppelgängers just sleep in the tunnels until the Wilson’s arrived? And how did the Adelaide doppelgänger meet up with Adelaide’s husband in those tunnels? Are we supposed to believe that those tunnels and science labs run across every corner of the country? If you can get past this ludicrous idea than you may enjoy the movie. I could not.

This Reel Quick is getting too long but let me wrap up somewhat more. So Adelaide and her family escape their doppelgängers and then later on we do find out that the Tylers also have doppelgängers (everyone does) but they are killed by their white doppelgängers. When the Wilson’s arrive to the Tyler’s house they have to survive the white doppelgängers and then they figure out by TV news sources that this phenomena is happening all over. The doppelgängers are killing their respected selves and then forming a human chain much like Hands Across America. Without much of a plan they take the nearest car and have to kill their respected doppelgängers. That’s basically it without spoiling more— and there’s not much more to spoil. Adelaide has to confront her trauma head-on in the same tunnels she was taken back in 1986 to find her son and take down Red.

I just couldn’t get past this bonkers premise. I’m sorry but it was borderline insane. It was like watching The Happening but with a more competent director/writer. It was like Peele had a decent idea and wanted to incorporate a lot of class themes and it just doesn’t gel in my opinion. The Hands Across America idea especially. I get that Hands Across America was a movement supposed to help homelessness but the only reason why Red and the doppelgänger’s even know about Hands Across America is from a T-shirt they found. Why was forming a human chain up on the surface a plan for the doppelgängers? It’s just an idea that doesn’t stick for the rest of the movie.

Overall: I loved Get Out enough to give Jordan Peele a pass on this. I’m also looking forward to checking out his Twilight Zone series. I liked his comedy show and think he’s an incredibly talented conceptually visionary—whether writing comedy or staging a great tense horror scene. But this movie left me absolutely cold. And I was also bored for most of the runtime which is never a good sign. Besides racking my brain on how the premise is all working and trying to find all the thematic “clues” that were placed right in front of our faces from the beginning—tunnels, C.H.U.D., white rabbits, the number 11, Hands Across America) I may have been side-tracked from getting any enjoyment from the supposed tension and terror that so many people have been praising. I didn’t see or feel that as I thought this wasn’t scary or tense at all and hence my boredom. Add that to the laughable premise and I was not a happy camper. However, I will say that I rather have a failed conceptual horror than something like Escape Room or Truth or Dare. This was a slightly better M. Night movie and Peele could’ve done better I think but I commend him for trying something different. 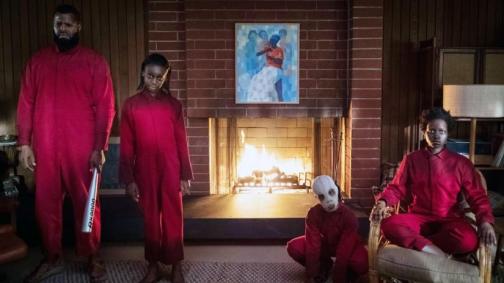 2 thoughts on “Reel Quick: Us”