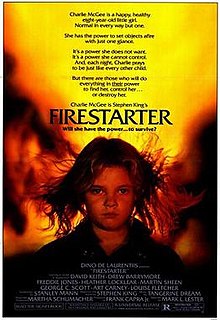 What’s It About: Drew Barrymore plays Charlie McGee who, along with her father, are trying to flee a nefarious agency that is responsible for making Charlie and her father telekinetic.

Scare Level: This is more of a sci-fi, action thriller than a horror movie. Probably why I left it out of last year’s Schlocktoberfest. That and it’s kinda good.

Gore Level: No gore. But plenty of crisped and charred flesh.

Nudity Level: George C. Scott only wears an eye-patch in one scene!

Best Scene: Easily the finale when Barrymore is going full nuclear on the bad guys with reckless abandon.

Worst Scene: This is not George C. Scott’s finest hour. The scene(s) where he’s trying to gain the trust of Charlie are tough to watch. Then again, most scenes with David Keith are bad too.

Overall: This one is one of the more entertaining flicks I’ve seen during Schlocktoberfest season and that is saying something. Not sure why it took me so long to check this one out. Don’t get me wrong, it’s not a great film and I wouldn’t say, run, go see it immediately but if it’s on and you have time to spare the final battle alone is worth it.

One thought on “Schlockleftoverfest: Firestarter”