By Brad July 19, 2017 Back to the Future Despicable Me 3 Kristen Wiig Lego Batman Minions Porky's The Lego Movie Trey Parker

Would you be able to sit through it?: I’m not sure. My 5-year-old barely sat through it (she’s kinda antsy anyway) and I dozed off somewhere in the middle. I really don’t know what it is about these Despicable Me movies, they are cute and well animated but they really aren’t that funny or entertaining. Very bland and middle-of-the-road to me. I think I chuckled maybe 3 times and that was mostly for the Minions or Trey Parker’s Balthazar Bratt, a villain who is perpetually stuck in the 1980s culture. Say what you will about the 80s it is always worth a chuckle when it’s the butt of a joke. I don’t recall the 50’s being this prominently used as butt of jokes when I was going up 30 years ago (save for the Back to the Future trilogy and Porky’s) but I’m probably way wrong. So will you be able to sit through it? That all depends on your threshold for mediocre comedy with these Despicable Me series of flicks. I can take it because I happen to have that high threshold apparently.

Any scary/violent parts?: Unless your kids are scared of giant track-suited wearing robots that shoot lasers out of its heads then I would proceed with caution.

Anything that will screw up your kid’s head?: These Despicable Me movies are practically harmless. Like I said they are middle-of-the-road in terms of comedy. I wish it would have more adult humor like the Lego Movies have (Lego Batman had a “dick” joke!) but sadly, the Illumination Animation movies are so tame. They seriously need to inject some deviant ideas sometimes to make them interesting. 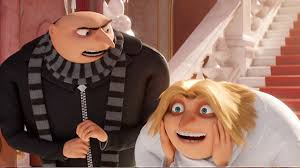 Any lessons to be learned?: Family is important. Two (really three) subplots revolve around family bonding or loss of family in this installment. Gru finds out he has a twin brother. Lucy (Kristen Wiig) tries desperately to get the girls to accept her as their mother. And the Minions leave Gru when Gru refuses to go back to villainy only to miss him in their absence while they are in jail.

Recommended age: 5. It’s not the easiest plot to follow for a youngster I would gather. Bad guys acting like good guys and weird, out-of-place 80s culture jokes going over their heads could be ponderous to a feeble young mind. My older daughter (age 8) loved the film but my 5-year-old barely cared. But maybe she takes more after me.

Rent it, buy it or avoid it?: Buy. We really should change this to Theatre, Buy or Avoid since who the hell rents anymore? Buy/Stream is practically the same thing nowadays too. But with soaring theatre expenses with kids’ films especially (tickets plus refreshments) coupled with the 25 minutes of annoying commercials and then another 25 minutes of annoying trailers for upcoming even crappier kids’ flicks, you’re better off staying home or going to the pool club than wasting time and money on this new Minion’s movie. Simply pay the $20 to buy it around the holidays (make it a stocking-stuffer!) and let the kids watch it by themselves while you drink in the corner. That’s what I wished I had done.