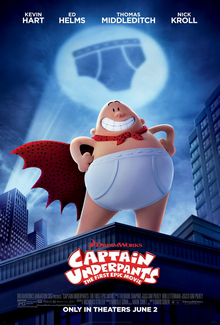 Synopsis: Two best friends in elementary school, who happen to write and illustrate comic books and pull elaborate pranks, hypnotize their cruel principal into believing he is their superhero creation Captain Underpants.

Would you be able to sit through it?: Uggghh. I really don’t know. Usually I’m cool with kids’ flicks but this one was just unfunny to me. Being a parent and being around a lot of kids, you realize that once they push the “lewd” envelope around adults with words like “poopy” “pee-pee” “fart” etc., you know that they push that envelope as far and as annoying as possible by repeating the same word or phrase until one of the other kids stops finding it funny—which is never—only to get on any grown-ups nerves after the third dozen “poop” joke. Well, imagine an hour and half long movie like that. Seriously, two-thirds or at least five-eighths (whatever’s more—I’m terrible with math) of the gags are poop or poopie or poop-related jokes. I think I laughed once and that involved a tiger. The main kids, Harold and George are not, what I found, to be interesting or endearing characters. In fact, they are brats. Sure they have a healthy friendship involving comic book creativity but they also are undisciplined pranksters who SHOULD be in trouble by the principal for what they pull. The principal, Mr. Krupp, is trying to run a school sure, but he also is a dick who apparently hates children and shuts down the art and music department and runs the school like a prison, so no sympathy with him there either. And the whole point of Captain Underpants is that he’s dumb so that joke can only go so far. Plus, his catchphrase is a very annoying “Tra-la-laaaaa!” which gets old really fast. Like I’ve been sick of it for weeks even before seeing this flick. In fact, I willingly fell asleep when I took the kids. And I regret nothing.

Any scary/violent parts?: It’s kinda a super-hero spoof so there is a big silly battle at the end between the boys, Captain Underpants and Professor Poopypants operating a giant monster toilet machine. But nothing I would call scary or too violent to not let the kids watch. Just lame crude potty-humor. There’s also the frequent running joke of the planet Uranus.

Anything that will screw up your kid’s head?: I’m more worried about what damage it did to my sensibilities. I’m still baffled at the random panty raid scene.

Any lessons to be learned?: Friendship is important. Creativity is great. It’s not a good idea to hypnotize people.

Recommended age: 5. The potty-humor is about what a 5-year-old would tolerate.

Rent it, buy it or avoid it?: Rent. If your kids like the movie and series of books then you’d probably want this in your collection. Personally, I’m good with never seeing this again.

Final Word: I did, however, like the animation and effects. In fact, it was neat how the film changed to various styles of animation at key scenes. Technically, this was a fun movie to watch, but story-wise it was dull to me. Not one joke that all ages could enjoy. Disney flicks and even the Lego movies give the grown-ups a lot of jokes that they would enjoy despite the kids maybe not getting it but there’s still plenty for them to like. This film had zero of that and that’s why I will rate it with a low score. My 8-year-old, and the other kids in the theatre, really seemed to enjoy it so there’s that to consider. To each his own.