“I didn’t have a normal background—I was completely demented from a very early age!” 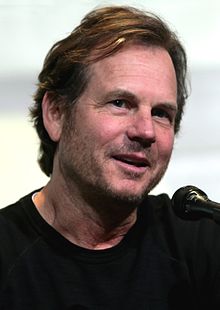 A wise man (or 80s hair band Cinderella) once said “You don’t know what you got, till it’s gone.” It’s almost always true. It was true in the sudden passing of prolific and good-guy character actor Bill Paxton.

Don’t get me wrong, I always loved Paxton and his goof-ball, bumpkin, frat-house style of character he usually played. If I found out he was in a movie, it made the movie at least 5 times more entertaining, no question. I don’t remember much from Twister, but I remember it didn’t suck as much as it should have, because Bill Paxton was starring in it. Near Dark also isn’t a universal crowd pleaser but damn if Paxton made it somewhat memorable.

But now that he’s gone, I wish I appreciated him more. As I was recalling all his great and cherished roles I was reminded of the little roles that he surreptitiously stole from the major stars, like his Hudson in Aliens and the chief punk in the first Terminator. Hell, I didn’t realize he was the bartender in one of my guilty pleasure flicks, Streets of Fire until recently. It’s been years since I last seen True Lies with Schwarzenegger but the scene that me and all my buddies loved best was the scene with him and Paxton driving. He always played a great sleaze-ball and even though I never met Bill in real life, from what I’ve been reading over the past day and half is what a kind and warm, loving gentleman he was. He was a great actor, who barely got the bulk of the limelight but was a key ingredient to most movies success. I can totally see why James Cameron used him in almost every movie of his. I probably would’ve loved Avatar if Paxton was in it.

I think the first time I ever seen Bill Paxton would have to be Weird Science. His boorish, dickhead big brother, Chet is still one of the best comedic roles in modern cinema. I’m not joking. Every line from him is classic. I was also reminded that he’s the only actor to ever be killed by a Terminator, a Predator and an Alien. If that’s not a crowning achievement in motion picture history I don’t know what is!

It sucks hard that at 61 it was game over for Bill Paxton. He had many more years left to play iconic and memorable roles. He may never get the respect he deserved from those stuffed shirts at the Academy of Motion Picture Arts and Sciences but I know he had a great many admirers and fans. We will miss you Bill. Hope you’re having a blast in shit-kicker heaven.