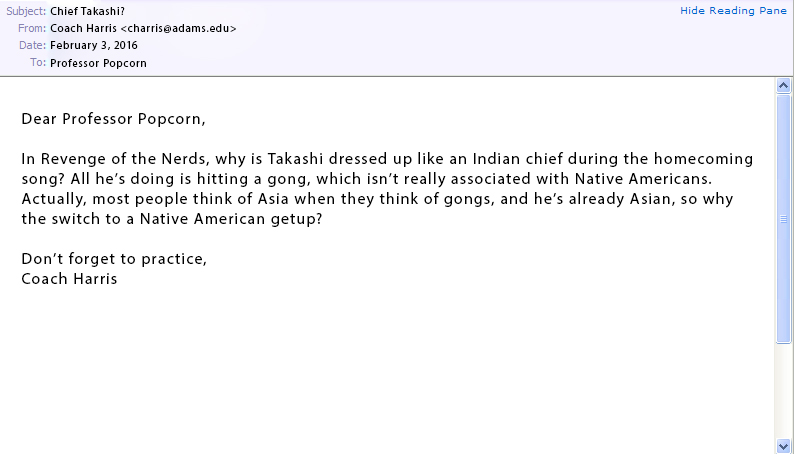 Although Takashi’s culture switch may seem jarring and nonsensical, I of course (and I alone) know the true reason for this strange change. You see, before the big event at the talent show, Lambda Lambda Lambda had been competing in Greek events all day, many of which you saw on screen. Takashi participated in a beer-swilling tricycle race (Why were underage freshmen allowed to guzzle alcohol at a school-sanctioned event? As was made clear in the film, the Greek Council runs every aspect of that college, rendering the dean completely impotent and powerless, much like yours truly after a night of drinking Walmart-brand perfume), but Takashi barely felt the effects of all those suds, because he took trichloromethylene, which is a drug that counteracts alcohol in the system, and which should have made the nerds billionaires. Drunk but not literally on his newfound power, Takashi pounded beers the rest of the day, at a rate of about one beer every two minutes, or 30 beers an hour, for the next seven hours. The rate of drinking was so unbelievable that Andre the Giant, who was on campus that day promoting a local wrestling event, told Takashi that his beer consumption was a little excessive. Takashi returned his concern with a flying shoulder drop, then pinned the Giant 1-2-3 and sent his ass packing back to France.

Anyway, the reason Takashi dresses up as an Indian chief is because initially he was supposed to be dressed in full samurai armor in keeping with his Japanese heritage, but by showtime his stomach was so bloated from the vast amounts of beer that he couldn’t possibly fit into the armor. This revelation was coupled with the fact that the trichloromethylene had the side effect of slowly eating away at his sanity until he went on a psychotic vision quest in which he rounded up every coyote on campus and locked them in the Moon Room of the funhouse in hopes of collecting their mystical powers, an experiment that ended in tragedy when Betty Childs entered the Moon Room in hopes of another quick lay and was devoured by the hungry beasts. In honor of the coyote, and it being the only costume he could get his gut into, Takashi outfitted himself in Native American garb that he stole off of a real Indian chief who was there to perform a coyote show in hopes of winning the talent competition until he realized it was for Greeks only. Takashi played the gong that night like no one before or since, and was never heard from again.

One thought on “Ask Professor Popcorn: Revenge of the Nerds”