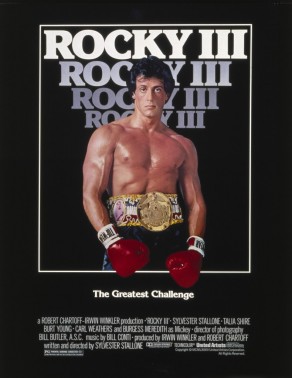 The Scene: “Thunderlips is here. In the flesh, baby.”

Why I Love This Scene: In this, the most believable fight in the entire Rocky series, Hulk Hogan plays Thunderlips, the Ultimate Male, a Mountain of Molten Lust. Seriously, is he like sexually attractive at all? Seems like most women would be frightened of him and his mustache. And kissing someone named Thunderlips doesn’t sound very appealing. Regardless, Thunderlips is still a more engaging character than a decade of the prayers and vitamins bullshit that the Hulkster gave us. This movie match is puzzling, but there’s sort of a reason for that. Back then, wrestling was still clinging to the antiquated notion of “kayfabe,” which is basically pretending that wrestling is real at all costs. Back in wrestling’s glory days, they insisted on keeping up the facade that they were actually heels and babyfaces who were their characters around the clock, and the two sides never ever were caught dead together or in any situation that betrayed the fans’ belief in their gimmicks. It was all sorts of crazy, and something that 99% of people don’t fall for today, or 9% of Kentucky. But back then, being a kid, it all seemed plausible. When I was 9, I believed that Ted DiBiase really did have at least a million dollars, George Steele was really some kind of animal, and Brutus Beefcake and Hulk Hogan were just really close friends. And that’s what’s going on in Rocky III, Hogan was actually a heel at the time (filming in 1981 was pre-Hulkamania) so Thunderlips acts like a crazed bastard because heels were crazed bastards 24/7. At least he did pose for a picture at the end.

So the “fight” is treated as a real thing, Thunderlips is out to hurt Rocky, so Rocky must legitimately fight back. It’s ludicrous. What really doesn’t make sense is that if Rocky and his crew thought it was just a fake exhibition, you’d think they’d go over the match with Thunderlips before it happened. But instead, Rocky at first tries to call the spots in the ring, but Thunderlips is having none of it, because since he’s a heel he’s a legitimate bad guy and wants to fight Rocky for real and because wrestling must not be presented as being fake in any way. When Thunderlips throws Rocky into the crowd, he could have snapped someone’s neck! And Paulie hits Thunderlips with a wooden chair! And Mickey is so distraught over all this violence that he has a cardiac episode! And Rocky takes his gloves off and starts blasting punches into Thunderlips TO NO EFFECT because Thunderlips is a superhuman monster! Like Brad.