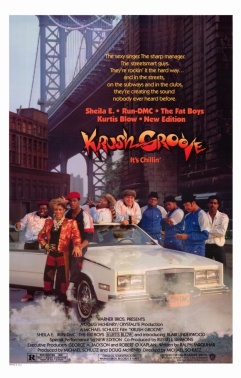 In honor of Straight Outta Compton opening this weekend, which I am really looking forward to seeing on Blu-ray in a few months, let’s take a look at the finest, most realistic movie ever made about the rap scene: Krush Groove. Boasting an all-star hip-hop cast of Run DMC, Kurtis Blow, the Fat Boys, LL Cool J, the Beastie Boys, Sheila E., New Edition, andDr. Jeckyll & Mr. Hyde, Krush Groove basically tells the real-life story of Russell Simmons and Rick Rubin forming Def Jam Recordings, but it’s presented in a fictional way, aside from the musical acts appearing as themselves. The main plot of Simmons (named Russell Walker in the film, played by Blair Underwood) doing whatever it took to push the label is fairly interesting, if overdramatic. But this movie is really all about having all of these pioneering hip-hop acts together in the same film and spitting out one hell of a soundtrack. Oddly enough, the Fat Boys kind of steal the show, along with a then 17-year-old LL Cool J, who indeed crushes grooves with “I Can’t Live Without My Radio,” created specifically for this movie but becoming one of his signature tunes.

With the exception of The Human Beat Box, these cats really aren’t that fat by today’s standards.

It is completely insane that Jam Master Jay was going to shoot LL for some reason, then 17 years later Jay was shot to death in a recording studio.

I love how everyone in Sheila E.’s band is trying to look like her.

It’s hard to believe all of these guys are dead now.

This is probably my least-favorite Run DMC song of all time.

This is the song that inspired me to produce rap albums.

Also, this story from the Wikipedia entry on Krush Groove was way too amazing not to share:

During an interview to celebrate the 25th anniversary of the film, Russell Simmons reflected on the legacy of Krush Groove and its position in hip-hop culture history. The film, Simmons said, is still recognizable not only for having brought together so many Def Jam stars at the time, but for also introducing new talent, such as LL Cool J. Cool J was so persistent during filming, showing up to shooting locations and performing freestyles, that producers ended up putting him in the final cut. This backdoor auditioning process became a staple of the production. “Other cats weren’t so lucky,” Simmons said. “We had this one cat who tried to be like LL, and we just couldn’t understand what his gig was. Dude was a total clown. He was wearing a clock around his neck way before Flav. Neon jumpsuits, everything. Of course our whole thing was black leather and adidas. That was the thing in rap at that time. He came in speaking some sort of pidgin English and just kept groping our female set workers. We called him ‘Hands’ at first cause we didn’t know what else to call him.” Simmons went out to explain that, after some time, they crew realized ‘Hands’ was actually speaking siSwati, a sister tongue to siZulu. “That’s when we called in Afrika Bambaataa, you know, cause this is ’84, right. The Zulu Nation was hot at that time, working that African infusion into everything, breakbeats, graffiti, peace in communities. We thought Afrika could translate. Nah, son. Ends up that dude doesn’t know a word of zulu.” As former crew members tells it, the rapper referred to himself as ‘Lishisa Lizambane’, siSwati for ‘Hot Potato’. Run of Run-DMC recalls “We didn’t know how he got to the Bronx, but apparently cat was from Africa. Like real Africa. As in, middle-of-nowhere Swaziland Africa.” ‘Hot Potato’ was a self-dubbed name, due to his penchant for passing himself around amongst ladies, not unlike the action of a real hot potato. As for his freestyles, Simmons claims he “had no idea what was happening, cause it was all jumbled up siSwati and English. He wouldn’t perform without a stick in his hand, occasionally made bird whistles, and randomly did high leg kicks for no reason. I remember thinking he was rappin’ about police, police, police. Come to find out, he just kept using this word ‘liphalishi’ which is some sort of a staple meal where he comes from. I kept thinking this clown was hard, but apparently he just kept rapping about food.” Due to the absurd nature of this unknown, producers couldn’t justify including one his performances in the final cut, out of fear of alienating their core audience. “We actually tried to film him in a scene once,” remembers Kurtis Blow, “but he kept putting his mug all up on Sheila E.” After filming, ‘Hot Potato’ was never heard from again, although speculation is that he returned to native Swaziland. “That’s unfortunate,” says Simmons, “cause once Public Enemy came out we realized just how ahead of the game ‘Hands’… excuse me… ‘Hot Potato’ really was.”