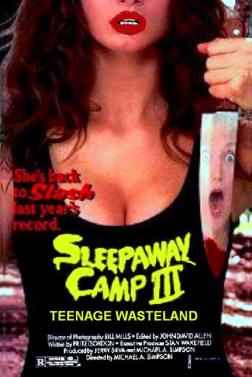 What’s It About: Since I covered the first 2 Sleepaway Camps, I figured I should finish the saga of psycho-killer Angela and her continual murder-spree at camp. I should’ve stopped at Sleepaway Camp II.

We’re almost there…almost to the plot of the movie. heeheehee.

I CAN HOLD MY BREATH A LOOOOONG TIME!!!

Is It Actually Scary: I was bored practically the whole time.

How Much Gore: Not as much as there should’ve been. I would give this film a better rating, despite how bad it is, if the kills were better and gorier.

I’ll give you three, no! Six guesses.

Best Scene: The firecracker up the nostril kill scene. Of course the clip is not on YouTube.

Worst Scene: There’s so much boredom going on in this lackluster sequel and there’s so many lame and weak death scenes. The lawnmower scene notwithstanding. What could’ve been a great gory death scene was cut before impact. Maybe there’s a deleted scene or director’s cut of the film but not on the version I watched.

Any Nudity: A bunch of gratuitous bewbs.

Angela is back and there’s gonna be some trouble…Hey Na, Hey Na, Angela’s back!

Overall: I really enjoyed the first 2 Sleepaway Camps. The second one wasn’t great but it was good ‘ol slasher fun. It was “campy!” But this one was a terrible bore. All the deaths were either weak or cut too short of the aftermath and the acting and story were atrocious. Avoid this one if you’re a fan of the first 2 movies. There’s a fourth one with really no connection to Angela and another sequel called Return to Sleepaway Camp that continues right after the original and disavows the other sequels altogether. From what I read about that one I may check that out and review it next year because it’s written and directed by the same director as the original. But anyway, don’t bother with Sleepaway Camp III: Teenage Wasteland.