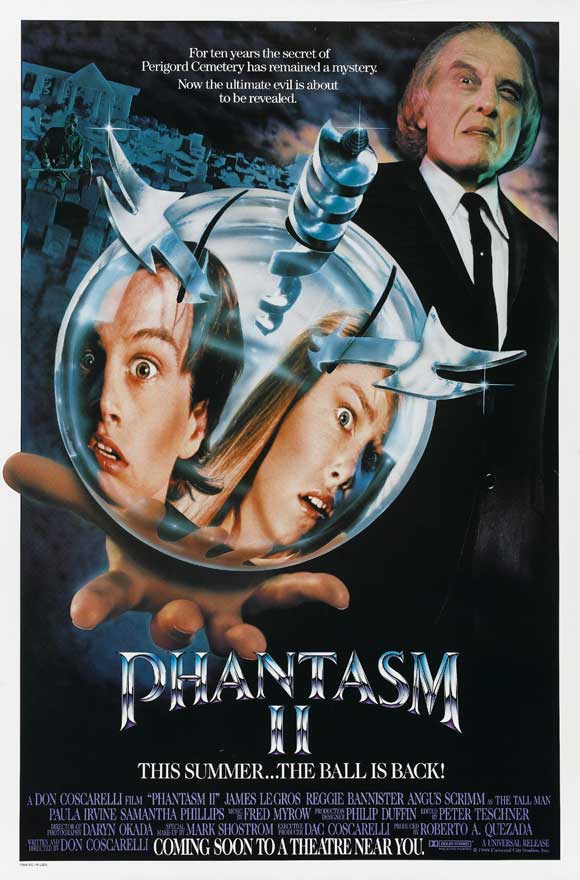 What’s it About: The original Phantasm is pretty good. It’s basically about a boy named Mike who sees some otherworldly crap going down at the local mortuary, headed up by The Tall Man, who kills people with a flotaing ball that has drills and stuff in it. He also commands an army of little demon things from another dimension. The plot isn’t really all that clear, and while it’s a good flick, it falls short of its potential.

The sequel picks up right where the first one left off, with Mike’s whole family dead and his brother’s friend Reggie as his guardian, which is somehow legal. The Tall Man comes after Mike at Reggie’s house, but he and Reggie escape. All of this is flashback with new expanded footage narrated by some blond. Fast forward 7 years, and Mike is just being released from a nuthouse. He goes to the local cemetery and digs up a couple of graves to confirm that all of the bodies are missing, presumably taken by The Tall Man, who uses the dead bodies to make his army of dwarf demons, or something along those lines. Reggie immediately tracks him down at the cemetery and takes him back to his house, which promptly explodes with Reggie’s family inside. Advantage: Tall Man. Mike has a vision of the house exploding about 2 seconds before it happens, rendering his vision completely useless. I guess that’s a good ability to have to duck out of the way if someone is going to punch you in the face, but not so much for something like a house exploding or a plane crash.

So Reggie has nothing to lose now and joins forces with Mike to put an end to The Tall Man’s horsestuff. They rob a local hardware/gun store, and Reggie manufactures one of the sweetest guns in movie history: the quad-barrel shotgun. Mike builds a little flamethrower. Nice try, Mike. That’s like whittling a wooden goldfish after someone’s built a robot shark. Especially when Reggie’s wearing that hat that says “Boogie Down.” Although, that shotgun has to be heavy as hell.

The movie wastes no time, as Mike and Reggie are hot on the trail of The Tall Man, which leads them to a dead town with an empty cemetery. They bust into the mortuary there, and find the girl from earlier, Liz, with The Tall Man as a snake-demon coming out of her back! You’re not Liz!! Reggie torches its ass.

So Mike has more dreams of Liz, which are actually true visions, but somehow they don’t involve her naked. This vision is of her at a funeral (naturally) and after the mourners leave, the priest mumbles something and drives a knife through a dead old man’s chest, which totally needs to happen more at funerals. I mean , they’re dead anyway, right? Might as well have some fun with it. Turns out The Tall Man works there, and that old man has custard for blood. He ends up coming back to life though, through the embalming power of The Tall Man, and ruins the nights of his wife and the priest who stabbed him.

Mike and Reggie pick up a gorgeous hitchhiker named Alchemy, so you know she’s trouble, especially since Mike saw her dead in a vision earlier. So Liz is back at the mortuary/mausoleum, and so is the priest, and finally, THE BALLS! I mean, the flying metal spheres with blades and drills. One of them bores a hole in the priest’s head, then The Tall Man sends Liz’s grandma, who is now one of the dwarf demons, after her, but Liz manages to hit her with a big vase, and is rescued by Mike.

Alchemy dry humps Reggie, which is perhaps the most illogical part of the whole movie, then The Tall Man shows up and snatches Liz. The Tall Man runs Reggie and Mike off the road, leading to their car exploding as they escape, which is a shame.

Just when you’re about to get restless because it’s been way too long since the priest got a hole drilled into his head, Reggie says to Mike, “Let’s go kick some ass.” Is it finally quad-shotgun time? Don’t tease me, Reg.

They bust into the mortuary to save Liz, and are attacked by balls and The Tall Man’s grave robbers, who the balls also attack, for some reason. This happened in the original, too. I guess the balls just don’t give a sh*t.

Thankfully at this point, it’s almost all action. Reggie goes chainsaw to chainsaw with a goon, Liz burns one alive and one finds out what its like to have a ball bore out your insides. It’s a lot like eating at Chipotle.

Reggie finally blasts four dwarf demons with the quad-shotgun! But just when you think things are finally getting awesome, he throws it away! You bald bastard.

The gang finds the secret dimension (or other planet, not clear) teleporter room, where the dwarf demons are made, for some reason, but The Tall Man finally shows up again and ruins their plans to torch the place. But they get him good when Mike uses a ball to bore a hole in The Tall Man’s head, then Liz gives him an “Oklahoma Tuesday Night Special,” which is acid and formaldehyde in the neck.

Alchemy comes around to pick everyone up in a hearse, but pulls a chunk of her hair off, which means she’s trouble. She seemingly kills Reggie, then Mike tries to tell Liz that this is “all a dream” until The Tall Man pops up and says, “No, it’s NOT!” and they’re pulled out of the back of the hearse by some dwarf demons. And then it’s over, and I feel like I probably could have done something more productive in that 97 minutes. 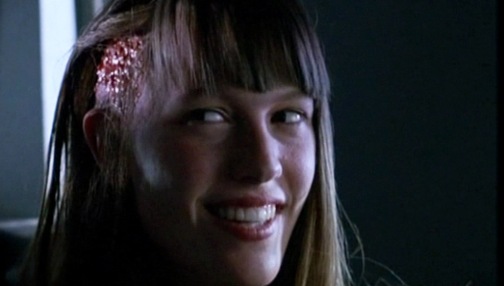 Is it Actually Scary: Nah. By 1988 we were more about action in our horror films than scares. The first movie is much more creepy, but this one does have a few OK jump scares.

Scariest Moment: There’s a lot of popping up, mostly by The Tall Man. He LOVES to pop up, so you can’t pick just one scary pop-up.

Gore Level: It’s almost an hour in before you see blood, but there’s a lot of it. The last half hour or so gets pretty gory, finally. 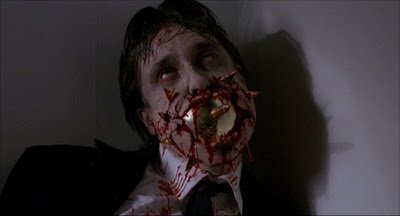 Best Part: The Tall Man’s “death” is nice and gruesome and over the top.

Nudity: Alchemy’s boobies, but they’re about the same size as Reggie’s.

Overall: While the original was suspense/horror, Phantasm II goes for action/horror, with mixed results. The second act moves slower than a frozen turtle, and you spend way too much time waiting for Reggie to blast his shotgun and for the balls to show up and drill someone’s face. So it’s a bit boring, especially when it’s unclear what the hell is going on. Fortunately, the last half hour makes up for it a bit.

So the sequel takes the story of the original, adds action, subtracts suspense, and ends up also falling short of its potential. While the original has its flaws, it’s more atmospheric and more interesting than the sequel. Phantasm II isn’t terrible, but it’s nothing to have a Phangasm over.