Schlocktoberfest Day 20: Day Of The Animals 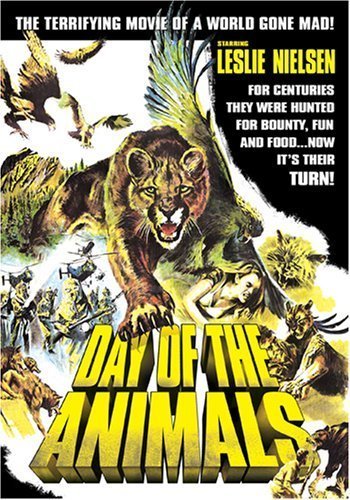 What’s It About: Like my previous post for Prophecy, Day of the Animals is a cautionary message B-movie about the ill-effects of the depletion of the ozone layer. In this flick, it turns out we bastards used way too much Aquanet and destroyed our precious ozone layer. Thus, letting in huge amounts of UV rays that doesn’t fry the Earth to a crisp or melt the polar ice caps but instead makes all the wildlife seek revenge. Apparently, the ozone layer is depleted in a matter of a few short years and a group of hikers and campers including fearless advertising executive Leslie Nielsen go up into a remote mountaintop with their guide played by Christopher George.

Soon after they are attacked by various birds of prey, mountain lions, bears and wolves. The sheriff in the nearby town is attacked in his kitchen by rats. Actress Susan Backlinie, who some might recall being the famous first victim to another animal-run-amok in Jaws is the first victim again killed by hawks and falls to her very blue-screened death. The hikers in peril split up due to varying opinions (or options) of life and death with one group now led by the very boorish and rude Leslie Nielsen. One man who was trying to get to a radio tower with the now deceased Susan Backlinie finds a traumatized little girl in the wild and gets back to town. Leslie Nielsen goes berserk from the UV rays and kills another hiker and attempts to rape his wife saying he “You see what you want you take. You take it! And I am going to do just that!” Until a grizzly bear challenges him to a wrasslin’ match and reduces Nielsen to doing crappy spoof-movies the rest of his long career. 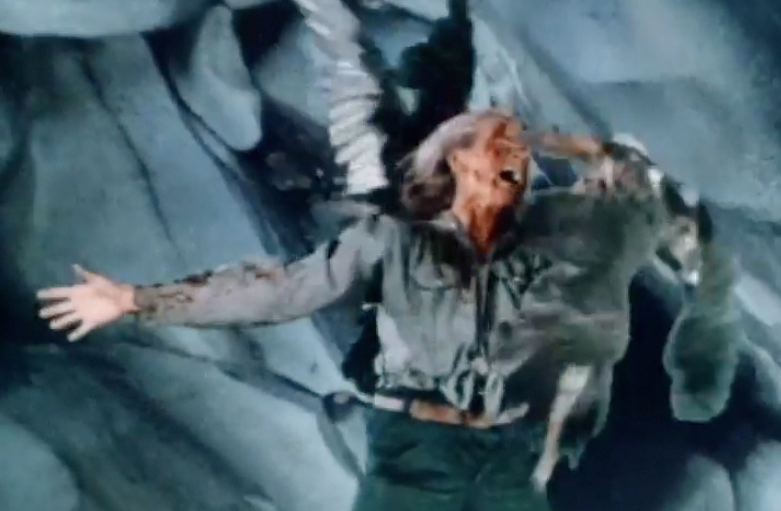 Susan Backlinie probably thought working for Spielberg was going to open all sorts of doors for her, but nope, just more movies of her getting killed by animals.

The rest of the hikers and the girl found in the wild survive as US troops march through the town in radiation suits but by then all the animals are dead by the dangerous amounts of UV rays. We also learn that the UV rays are now somehow back to normal and the ozone layer is fixed.

Is It Actually Scary: Unlike Jaws which used a huge animatronic shark killing swimmers, this film used all real animals attacking the hikers. Mountain lions, wolves and dogs, hawks, owls and vultures and even bears are actually filmed fighting humans. But also unlike Jaws the rest of the film is downright lousy and laughable.

Scariest Moment: Unfortunately I was more frightened at Leslie Nielsen attacking his group and attempting to rape a lady than any of the animals attacks. 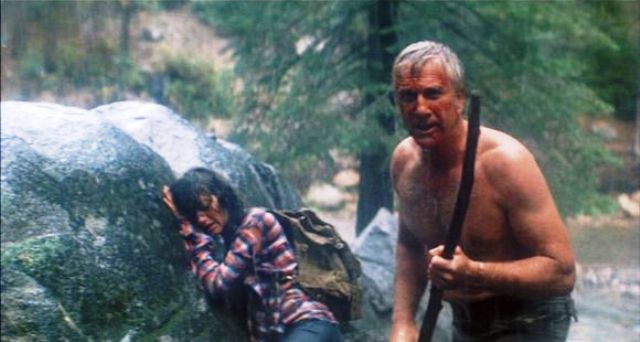 Call me SHIRLEY ONE MORE TIME...I DARE YOU!!!

How Much Gore: Not too much. When the sheriff is attacked by the rats his face is a bloody mess but otherwise most of the other attacks are fairly tame.

Dumbest Moment: The sheriff is awakened late at night and afterwards decides to get a midnight snack. While he approaches the kitchen he hears scratching noises. When he puts the kitchen light on he sees nothing. He takes out a huge plate of what may be ribs or brisket and places it on the table as he goes back to the fridge for something else, most likely the second course, and when he turns around the plate is full of huge black rats gnawing away at the meat. He is stunned, naturally but when the rats see him they attack! Have you ever seen a rat jump four feet in the air to attack a man’s face? No, well they do when they are poisoned by UV rays!!! So think twice about using aerosol cans.

Another dumb moment is actually the written prologue before the movie even begins:

In June 1974, Drs. F. Sherwood Rowland and Mario Molina of the University of California startled the scientific world with their finding that fluorocarbon gases used in aerosol spray cans are seriously damaging the Earth’s protective ozone layer.

Thus, potentially dangerous amounts of ultra-violet rays are reaching the surface of our planet, adversely affecting all living things.

This motion picture dramatizes what COULD happen in the near future IF we continue to do nothing to stop this damage to Nature’s protective shield for life on this planet.

COULD happen?! Wouldn’t the rays simply just kill everything before making lifeforms on the planet go insane and try to kill anything? It COULD also make everyone super-intelligent or super-horny—We just don’t know. And the fact that at the end of the film the ozone layer heals itself in a matter of days makes all this danger moot anyway.

Overall: I didn’t plan on this second movie of my Nature-Strikes-Back week of horror flicks to also be a message movie but what a great coincidence. This one is completely unbelievable compared to Prophecy. Making some mountain wilderness animals attack a group of hikers because they are affected by strong UV rays is simply ridiculous. Using real animals to attack is great. I’m glad I know what to do when an owl swoops down at my face. Or that rats can now leap 5 feet at me and could claw at my face. These are all helpful tips. Leslie Nielsen was a ‘hoot’ though. He was eating scenery like it was his last meal. I’ve really only seen him be serious in Creepshow (a stretch to be called serious I know) and the rest were Naked Guns, Airplane and countless other copycat spoofs and a performance like this makes sense that the Zucker Brothers choose him for Frank Drebin. He’s hysterically awful. Line’s like these are worth laughing over: “You hear that, everyone? Hot shot says there’s food up ahead. That is, if he’s reading his map right. Well, what the hell, let’s get going. I’m hungry.” He calls Christopher George’s hiking guide character Hot Shot about 2 dozen times. His bear wrestling match is simply adorable. But I’m sorry to say I didn’t get the message that the filmmakers were trying to convey because they made a shoddy, piss-poor horror movie. It was still better than M. Night Shyamalan’s The Happening in each and every way.

4 thoughts on “Schlocktoberfest Day 20: Day Of The Animals”