Apollo 13 vs. The Right Stuff

Here’s a new feature where we take two movies with similar themes (or an original and a remake) and pit them against each other in different film-making categories to see which comes out on top! this time it’s:

While both movies had really good ensemble casts, the three main actors in Apollo 13 had a harder job of performing on basically one confined set the entire time. And Ed Harris beats Ed Harris. Plus, Scott Glenn is the worst.

Apollo 13: While there are some pretty cool set pieces, 80% of this movie was shot in three confined spaces (mission control, the capsule, and the test capsule). It couldn’t have been easy to shoot in the Vomit Comit, so that’s a pretty impressive achievement. With apologies to all you Willow fans, I think this is Ron Howard’s best work.

The Right Stuff: Directed by Philip Kaufman, who never did anything else remotely on this scale. Kaufman had to deal with an enormous cast in multiple locations, plus use limited technology to make the flights look good. It just seems like it was a much-more difficult shoot.

Apollo 13: One of the most gripping, tense situations in American history. Howard pulls it off pretty well by mixing in old news footage, particularly of Walter Cronkite.

The Right Stuff: A massive story about the beginnings of the space race. There’s so much to tell that it’s hard to condense it all into one movie, but they did it.

It’s close, but I have to give The Right Stuff this one on sheer magnitude.

Apollo 13: Apollo 13 looks excellent and the visuals still hold up 18 years later. The zero-gravity scenes, of which there are many, are done flawlessly.

The Right Stuff: Since this movie came out in 1983, Kaufman didn’t have the luxury of CGI that Ron Howard did, so he used classic optical effects and they look amazing.

They’re both excellent and memorable, but personally I lean more toward Apollo 13 because I think it has more recognizable cues.

Apollo 13: “Houston, we have a problem” is one of the most quoted movie quotes ever and had a million uses, from your car breaking down to dinner getting burned to a condom breaking.

The Right Stuff: Uh, it was good? So good, no one really bothered to make another realistic NASA movie until Apollo 13? Unless you count Space Camp, which I do. Crap, I should have done Space Camp vs. The Right Stuff. 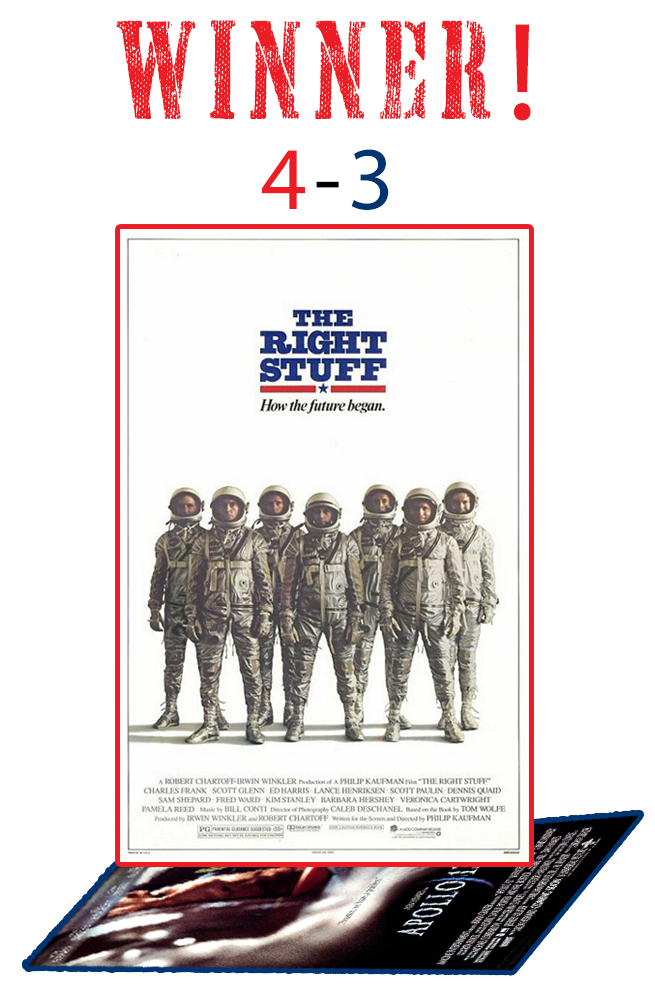 That was a close one, and both these movies are great insights into the U.S. space program, but The Right Stuff manages to launch itself to victory.

Did we score the fight fair? Which movie won on your scorecard?